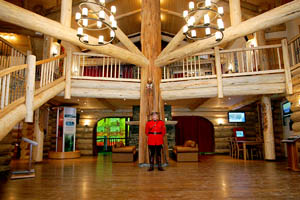 In early May 2005, Sitka Log Homes was chosen to build B .C. Canada Place for the 2006 Olympic Games in Torino to showcase B.C. products and to offer a glimpse of what the world could expect for the Winter Olympics going to Vancouver in 2010. Sitka’s previous experience building 3 magnificent log lodges used during the Salt Lake City 2002 Winter Olympics and their vast international experience was the catalyst which helped them to qualify and then to win the competitive bid to build this project.

The 4,200 sq.ft house was built with sustainable and almost entirely B.C. made products. The log shell was built using beetle-killed lodgepole pine harvested from the interior of B.C. “We saw this as an important opportunity to show the rest of the world the natural beauty of this wood and to confirm its structural integrity.” said John Johnson of Sitka Log Homes Inc.

The lodge, designed in house by Sitka Log Homes, blends warm rustic style with sophisticated high tech. It was specifically designed to welcome wheelchair visitors as well, including a glass elevator and state of the art meeting rooms for our Olympians and industry officials feature the latest technology. Several kilometers of wiring was installed for the system which is computer controlled and could change the inside and outside lighting from anywhere in the world. Outside the house, landscaping was designed to evoke the look and feel of B.C. with clusters of fir trees ranging in size from 2 meters to 10 meters high flanked by an array of local boulders weighing up to 2000 pounds.

The project had more than it’s fair share of Olympic sized hurdles to jump over. There was the special engineering needed to safely place the large building on the chosen site which sat on top of a 3 level parking garage. There was the tricky task of designing the building to attach to an existing glass building. 5 out of the 11 containers shipped to Italy contained the log shell, which according to the European Union, must now be heat treated before shipping. There was the truckers strike in B.C which caused many logistical problems in obtaining containers. There were various train derailments delaying transportation within Canada and then more truck strikes in Italy when the containers had finally arrived. Despite it all the log house was finished by the requested dead line of Jan 3rd, 2006 just 3 ½ months after receiving the first container on site, and to high praise from all who’ve visited it.

One of the main attractions was the massive cedar post in the center of the house. Johnson explained “The 238 year old large diameter log was washed ashore in Bella Coola before we rescued it and incorporated it into our design.” It is now being called the “Spirit Log” and visitors are being encouraged to touch the B.C. Spirit Log and receive the energy, best wishes and Olympic spirit of the people of British Columbia.

Where is it now? Check out Casa Canada in it's new location.

From the beginning, this log house project created a lot of interest amoungst the media.
The announcement that Sitka Log Homes was awarded the contract to build BC Canada Place and a look at the house being constructed in our log yard in 100 Mile House, BC.

During the 2006 Winter Olympic Games in Torino, Italy

The log house attracted a lot of attention from the local Italians and from anyone that visited Torino during the Olympic games. Media from all over the world were interested in "Casa Canada" as the Italians affectionately referred to it.

After The Olympics Were Over

Many people are curious about what became of the popular log house, which for so long sat in the middle of a piazza in the centre of the busy city of Torino.